Critically hailed and top-selling independent music sensation Chelsea Williams will release her debut for Blue Élan Records, Boomerang, on August 18. The album was recorded at the Heritage Recording Company in Burbank, CA, with the gifted multi-instrumentalist Ross Garren producing. The result is a work that ties together Williams’ influences – Americana, indie-folk and lush pop – for a transcendent listening experience that will place the young singer-songwriter front and center among the preeminent performers of the day.

Williams and Garren recorded Boomerang with a select group of LA’s finest musicians with an aim toward capturing each track as honestly as possible. 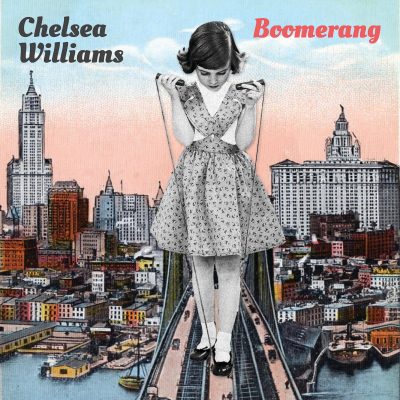 “Every instrument on the record was played by a person,” Williams states proudly. “No samples or synths. I’ve already been through the process of recording songs the way I thought that I was supposed to or the way someone else thought that I should. With this record, I wanted to let creativity rule the process and not be afraid to step outside of what was expected of me.”

Depending on your point of view, Williams is either the music industry’s best- or worst-kept secret. In the past few years she’s appeared on The Today Show, has opened for big names such as the Avett Brothers and Dwight Yoakam, and she’s even dueted with Adam Levine in Maroon 5’s video for “Daylight (Playing For Change).” But the golden-voiced chanteuse has made her biggest impact performing her music on the Third Street Promenade in Santa Monica, California, where she’s moved an astonishing 100,000 copies of her independent CDs, winning fans such as Academy Award-winning director Ron Howard and even one of her biggest influences, Sheryl Crow.

Another fan was Kirk Pasich, President of Blue Élan Records, who one day heard Williams play on the Promenade. Captivated by her voice, her presence and her songwriting, he decided on the spot that she had all of the things he wanted in artists for his label. The two bonded over Williams’ goal to make a record that would reflect her commitment to processing emotions with honesty, courage, hope and humor, and she poured everything she had into the recording of Boomerang.

The resulting album is an unqualified triumph. There’s the wistful pop symphony “Angeles Crest,” on which Williams envisions the mountains she and her mother once drove by. With clear-eyed perception she looks back at the road once traveled and stares down the future on “Fool’s Gold” (“I wrote it right when I parted ways with my prior label. It’s me processing the situation”). Opening her throat with the bracing line “I was frozen by a mighty cold wind,” Williams further recounts that painful label experience on the aching country ballad “Dreamcatcher.” “Out of Sight” is a striking, chilling piece of torch-song blues, on which she casts off a previous personal entanglement with the mantra “out of sight, out of mind.” But on the buoyant, aptly titled “Rush” she finds herself caught up in the dizzying first flush of a new love.

“For me, this record has been an exercise in taking the reins and forging my own path in music and in life,” Williams says. “I had never been given a record budget that came with so much creative control before. With that kind of freedom came a greater sense of responsibility and a greater pride in the work we were creating. I am so proud of the record Ross and I created.”

Following the release of Boomerang, Williams will embark on her first national headlining tour.