Three-time GRAMMY® Award-winning multiplatinum band Maroon 5 have announced the first details of their upcoming 2018 world tour produced by Live Nation, which is happening in conjunction with the release of their highly anticipated new studio album, Red Pill Blues.  The first leg of the band’s Red Pill Blues world tour will kick off on May 30, 2018 at the Tacoma Dome in Tacoma, WA. Tickets for the multi-city tour are set to go on sale starting next Saturday, November 4th at 10:00am local time on Ticketmaster.com. 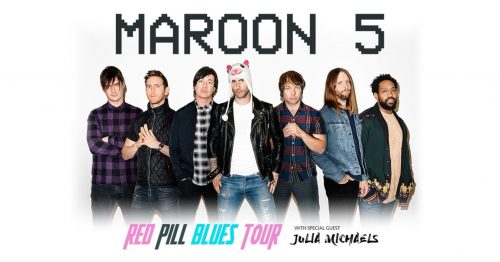 U.S. and Canadian residents who purchase tickets online between October 30th and November 10th will be able to redeem (1) physical or digital copy of Maroon 5’s new album “Red Pill Blues” out Friday, November 3rd, 2017. All albums must be redeemed by February 3rd, 2018 at 11:59pm PST.

Maroon 5’s 6th studio album, Red Pill Blues, is set to debut on November 3, 2017 (222/ Interscope). Executive produced by J. Kash and Adam Levine, and featuring special guest appearances by SZA, Julia Michaels, A$AP Rocky and LunchMoney Lewis, the album will include both a 10-track standard edition, as well as deluxe version. The band is set to kick off the release week for their new album with a series of television appearances on The Tonight Show Starring Jimmy Fallon (11/1), TODAY (11/2) and The Ellen DeGeneres Show (11/7).

Maroon 5 recently debuted the album’s irresistible new single, “What Lovers Do,” which features Top Dawg Entertainment artist SZA. The song has quickly climbed into the top 10 on both the Top 40 and HOT AC radio charts, as well as clocking 143 million streams on Spotify and nearly a combined 75 million views on YouTube. In addition to their new hit single, the band also just premiered two eagerly awaited unreleased songs from the album, the undeniably catchy “Help Me Out,” which features Julia Michaels making a show-stopping cameo, and the cinematic rhythmic track “Whiskey” ft. A$AP Rocky.

Maroon 5 stand out as not only one of pop music’s most enduring artists, but also one of the 21st century’s biggest acts. To date, the universally renowned Los Angeles band have achieved three GRAMMY® Awards and become “the most successful group in the history of the Billboard Hot 100” with 12 Top 10 entries, sold over 20 million albums and 48 million singles worldwide. The band has additionally earned gold and platinum certifications in more than 35 countries.  Maroon 5 won over fans and critics alike with the hybrid rock/R&B sound they introduced on their debut album, Songs About Jane and their double platinum album, It Won’t be Soon Before Long.  In 2010, the band released their third studio album, Hands All Over, which featured the hit singles “Misery” and the anthemic “Moves Like Jagger,” which has become one of the best-selling singles of all time. In 2012, Maroon 5 released Overexposed, which quickly reinforced the group’s status as a powerhouse in popular music with all of the collection’s singles rising to the top of the charts. The band quickly also set a record for the most #1’s (six in total) by a group in the Top 40 chart’s 20-year history. Maroon 5’s most recent studio album, V, debuted at #1 on Billboard’s Top 200 chart and featured the hit singles “Maps,” “Animals” and “Sugar,” all of which went #1 on the Top 40 chart.  The music video for the album’s GRAMMY- nominated single “Sugar” has notably logged a record setting 2+ billion views to date.  2017 saw the musicians release two additional chart-topping singles, “Don’t Wanna Know” and “Cold,” as well as close out a massive world tour that touched down in 30-plus countries for 120 concerts in front of more than 2.5 million fans. On this tour, Maroon 5 also became the first American artist to headline two nights at “Rock In Rio” in September 2017.