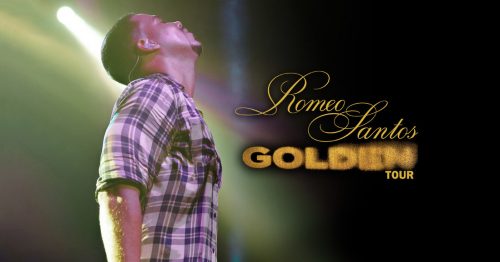 Tickets will go on sale to the general public starting November 24 at 10am local time at LiveNation.com. Exclusive VIP Packages for the “Golden Tour” will also be available to purchase at VIPNation.com. Presales for the tour will begin Tuesday, November 21.

The tour is titled after Santos’ latest studio album “Golden,” which was released earlier this year and earned the biggest sales week for a Latin studio album not only of 2017, but in over two years. The album also marks Santos’ fourth No. 1 on the Top Latin Albums chart and his third top 10 on the Billboard 200.

The global superstar, singer, songwriter, mogul, actor, and producer rose from humble beginnings in the Bronx, NY to worldwide renown over the course of his unbelievable career. “The King of Bachata” fueled the success of Aventura as chief producer and songwriter before going solo. In addition to selling over 100 million singles and 40 million albums, he has won a stunning 17 Billboard Latin Music Awards, 9 Premio Lo Nuestro Awards, 6 ASCAP Awards, 5 Premios Juventud Awards, 3 Billboard Music Awards, 2 Latin American Music Awards, 1 BMI Award, and 1 MTV Award. Throughout the past decade, the likes of Drake, Usher, Enrique Iglesias, Pitbull, Lil Wayne, and more have all jumped at the chance to collaborate. An accomplished visionary, he also acts as CEO of Roc Nation Latino in addition to appearing in films such as Furious 7 and Angry Birds. No other Latin artist has achieved as many number ones in the 21st century.