Hess Corporation’s 2017 Mini Collection is now on sale exclusively at www.hesstoytruck.com for $26.99 with free standard shipping and Energizer® batteries included.

The 2017 Mini Collection is a limited-production set with three highly detailed, small-scale versions of popular holiday Hess Toy Trucks – the 2005 Hess Emergency Truck, the 2006 Hess Toy Truck and Helicopter, and the 2007 Hess Monster Truck.  Each miniature truck is equipped with working lights and a detachable display base with description. 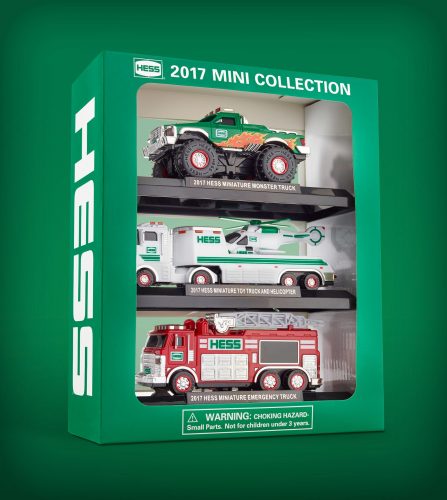 Hess introduced the collectible miniature series in 1998 to pay tribute to popular Hess holiday Toy Trucks from the past. This marks the first time a three-in-one miniature set has been available.