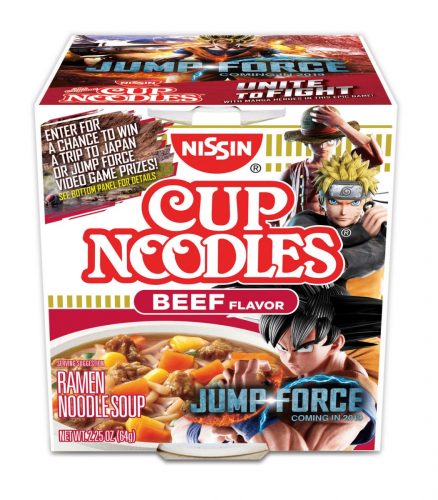 Nissin Cup Noodles announces its “Jump to Japan Sweepstakes” in partnership with the highly-anticipated video game JUMP FORCE from BANDAI NAMCO Entertainment America Inc. Fans across the nation will have the chance to win once-in-a-lifetime prizes through purchase of limited-edition Cup Noodles packaging, including an adventure-packed trip to Japan, copies of the JUMP FORCE game, and official Cup Noodles prizes.

From now until June 30, fans can purchase specially marked Cup Noodles and submit a photo of their purchase receipt to www.NissinFoods.com/JumpForce to be entered for a chance to win a wide selection of prizes. Winners will be randomly selected and announced on July 12, including a Grand Prize Winner who will win a trip for two to Tokyo, Japan. The Grand Prize Winner will also receive tickets to the world-famous Cup Noodles Museum in Yokohama, Japan, in addition to several other prizes. There will also be First and Second Winner prizes featuring copies of JUMP FORCE game and highly-coveted Nissin Cup Noodles merchandise.

“JUMP FORCE celebrates 50-years of manga comics that have exploded into our pop culture and have become ubiquitous with video game fans around the world,” said Stephen Akana, Brand Manager for BANDAI NAMCO Entertainment America Inc. “The ‘Jump to Japan Sweepstakes’ partnership with Nissin Cup Noodles will give our fans the chance to experience the unique and exciting culture of Japan, home of their favorite food and entertainment.”