The Robot War is a 5-issue action/comedy graphic novel that features Santa Barbara under siege by a robot army hell-bent on annihilation in the single most devastating terrorist attack on American soil. A group of entrepreneurs, led by a listless dreamer, must make it across town to rescue his girlfriend and a school bus full of trapped children before the evil machines get to them first. 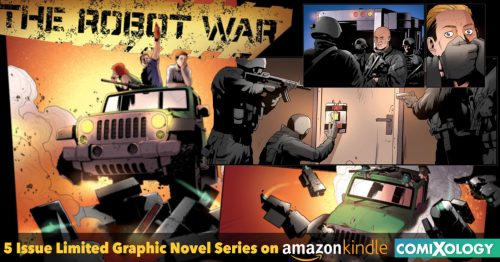 The Robot War – On Amazon and ComiXology Now (PRNewsfoto/Joe Friend)

The Robot War uses “off the shelf” tech to invade a town with ‘do it yourself’ robots. The author spent a fair amount of time to guarantee this invasion is technologically possible today.

From The Robot War, Issue 1:
“It wasn’t like the movies…more precisely, how the movies portray their idea of a robot invasion. This event did not contain any humanoid robots with overly complex systems designed to complete the rudimentary task of assassination. It wasn’t some dystopian future where humankind finds itself enslaved to generate electricity for a civilization of advanced robotics. But both are a good place to start in order to look at the difference between fact and fiction. With the idea being to help you wrap your mind around the events that transpired with the hope of defending yourselves when they ultimately happen again. And it will happen again.”

About the Author:
Joe Friend is an author, screenwriter, musician, and media and entertainment executive focused on premium digital video publishing and monetization, who lives in Los Angeles, California.