theScore, Inc. (TSX Venture: SCR) (“theScore”) today announced that its bot for Facebook Messenger was among the first wave to launch group chat functionality, enhancing its ability to power sports fans’ conversations on the platform.

Sports fans chatting with friends on Messenger will now be able to pull content from theScore bot right into their conversations with multiple people by tapping the Chat Extensions feature from within their group and selecting theScore. Content includes breaking news stories from theScore newsroom as well as the most relevant and entertaining multimedia sports content from across the web. 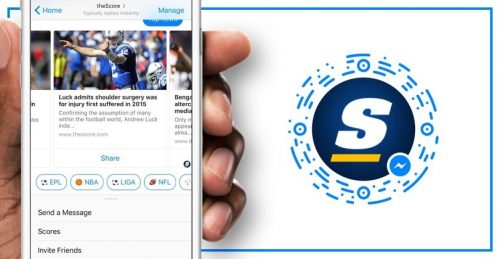 theScore was one of the first media companies to unveil a bot for Messenger following last year’s F8 Developer Conference. Today’s new feature launches right in time for this year’s event in San Jose, making it another first for the sports media company, which made its name with its flagship mobile app ‘theScore‘ – now one of the most popular in North America.

“Millions of fans all over the world are already talking sports with their friends on Messenger every day, and theScore bot now takes these conversations to the next level by allowing them to pull in, share and debate the biggest stories and most compelling sports content out there,” said Riaz Lalani, Vice President, Product at theScore.

“Sports is about identity and community. theScore bot has so far focused on the identity aspect, allowing users to follow and be informed and entertained about their beloved teams. Now, with Chat Extensions, we can truly tap into communities of sports fans and Messenger makes that simple and powerful.”

At launch, fans can filter content by sport, with coverage offered for basketball, baseball, soccer, football, hockey and cricket with plans for support for individual leagues and teams already in the works.

“We are thrilled theScore has taken this opportunity to build a Chat Extension in Messenger,” said Stan Chudnovsky, Vice President of Product for Messenger. “This offering will give sports fans a great way to stay on top of, share and discuss the content that matters most to them with their friends right in Messenger.”

You can install theScore bot for Messenger here.