2K announced details surrounding the Season Pass and downloadable content offerings for WWE® 2K18, the forthcoming release in the flagship WWE video game franchise. The offerings will include playable WWE and NXT® Superstars, including fan-favorites The Hardy Boyz; a host of new in-game moves; and access to both unlockable content and player progression features. The individual content packages will begin releasing in late 2017, with some packages releasing in early 2018, for the PlayStation® 4 computer entertainment system, Xbox One, Nintendo Switch™ and Windows PC. 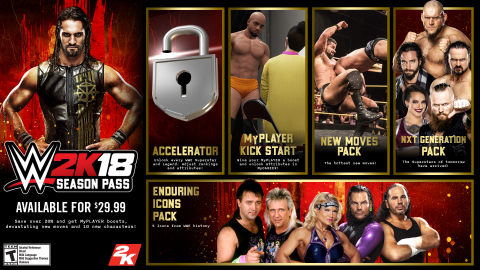 WWE 2K18 downloadable content offerings are scheduled to include the following items and be available for purchase on the PlayStation™Network for the PS4™ system, Xbox Live online entertainment network from Microsoft for Xbox One, Nintendo eShop on Nintendo Switch and Steam for Windows PC:

About the WWE 2K18 Season Pass

Players may purchase select WWE 2K18 downloadable content at a reduced price point through the game’s Season Pass. For $29.99, a savings of more than 20 percent versus individual content purchases, players will receive the following items as they become available: