FantasyFootballNerd.com is changing the way that people look for advice during their fantasy football drafts this season. Available today, FantasyFootballNerd.com customers with an Alexa device such as the Amazon Echo, Echo Dot or Echo Show can ask the Fantasy Football Nerd skill for Alexa which players they should draft.

With more than one million active users, Fantasy Football Nerd continues to bring more of its services to Amazon Alexa. It was the first company to offer fantasy football news and player updates in 2015. Last season, it became the first company to let users ask for weekly sit/start advice along with trade advice. 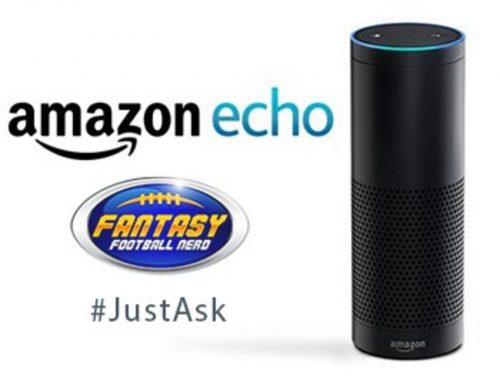 “The days of printing out cheat sheets is over. Help is literally available for the asking this season,” said Joe Dyken, CEO of TayTech, LLC, the parent company of FantasyFootballNerd.com. “It doesn’t matter what league platform someone is drafting on. Our Alexa skill is independent and works for everyone across multiple scoring formats. When you’re on the clock, Alexa is the draft helper that you’ve been waiting for.”

To enable this skill on any Alexa device, users can simply say the phrase, “Alexa, enable the skill Fantasy Football Nerd.” Once enabled, the skill is available and free to use for any customer.

Alexa will respond back with the player who is projected to score more points over the season in standard scoring, PPR (point per reception), and half-point PPR formats. Responses are based upon the innovative NerdRank algorithm created by Fantasy Football Nerd, which searches and aggregates rankings and projections from 35 of the leading fantasy football websites including NFL.com, ESPN.com, CBS Sportsline, FOX Sports, and Yahoo. It then weights each of those rankings and projections based upon how accurate each website is to produce the industry’s most accurate consensus rankings.

“Getting fantasy football advice has never been easier,” said Dyken. “Because we already search all of the major fantasy football websites, we have aggregated all of that advice into one place. When someone asks Alexa for a suggestion on who to draft or who to start in their lineups each week, they are getting the most accurate and comprehensive suggestion available in the industry. Even better, they are getting it by simply asking for it.”

Called the “Cliff’s Notes of the Industry” by the Washington Post and the “Best Kept Secret in Fantasy Football” by the New York Times, FantasyFootballNerd.com is the fantasy sports industry’s only weighted consensus system. Founded in 2008, the company has continued to increase its market share in the competitive, $70 billion fantasy sports industry by introducing innovative solutions for both average and die-hard fantasy football fans. The Fantasy Football Nerd skill on Alexa will remain free for the 2017 season.