Due to sell out shows across North America, Justin Timberlake has revealed ten additional dates for the coveted The Man Of The Woods Tour. Second shows have been announced in Toronto, New York, Chicago, Boston, Montreal, Las Vegas, San Jose, and Los Angeles. Two new cities have also been added, with shows in Pittsburgh on June 1 and Philadelphia on June 2. Produced by Live Nation Global Touring, Wright Entertainment Group, LBI Entertainment & Tennman Touring, the North American outing kicks off March 13 in Toronto. 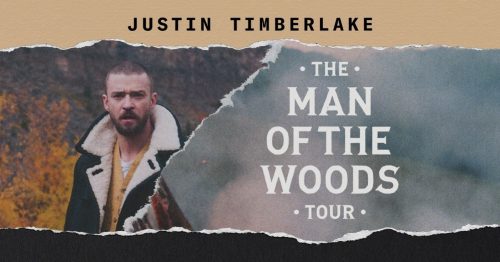 Timberlake’s forthcoming album Man Of The Woods is scheduled for release on Friday, February 2.  His highly-anticipated performance at the Pepsi Super Bowl LII Halftime Show will take place on Sunday, February 4, the third time he is performing at the most watched musical event of the year. Timberlake’s last tour was the critically acclaimed The 20/20 Experience World Tour, which sold out arenas and stadiums around the globe in 2013 and 2014.

Members of The Tennessee Kids Fan Club are also eligible for pre-sale ticket purchase. For complete The Man Of The Woods Tour VIP packages information or to purchase, visit https://vip.justintimberlake.com/

JUSTIN TIMBERLAKE THE MAN IN THE WOODS TOUR ITINERARY