Rusty Rivets, The toy line will be available at Toys”R”Us

Kids can now build their favorite vehicles and characters like Botasaur within their very own Rivet Lab Playset, while continuing to invent new builds inspired by the ingenuity and innovation seen through Rusty and Ruby. The preschool toy line will debut exclusively at Toys”R”Us stores across North America and online at Toysrus.com and Toysrus.ca on August 1. 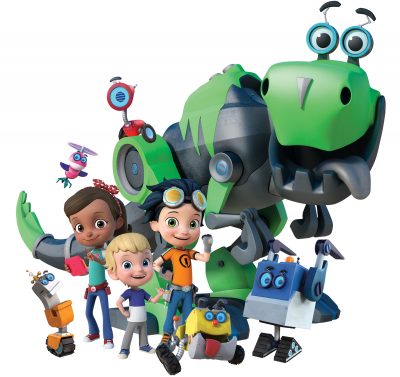 “As part of our growth strategy to produce evergreen global entertainment properties such as PAW Patrol and most recently Rusty Rivets, we’re thrilled kids can now invent alongside the show’s hero characters, Rusty and Ruby.” said Ben Gadbois, Spin Master’s Global President and COO. “Inspired by elements of the maker culture, the Rusty Rivets toy line combines an easy-click system allowing each of the pieces to work interchangeably, encouraging a sense of discovery and open-ended creative play.”

“Since the debut of Spin Master Entertainment’s Rusty Rivets on Nickelodeon last summer, we knew we had to have this line for our customers,” said Richard Barry, Executive Vice President, Global Chief Merchandising Officer, Toys”R”Us. “Spin Master has a track record of developing innovative toys that bring unique TV characters to life for kids, and we are especially excited that we are the only retailer to sell the Rusty Rivets line.”

The Rusty Rivets toy line, which is designed for children age 3 years and up, ranges from $5.99 to $39.99 (MSRP), and includes the following items (among others):