Travis L Salisbury, Author of Counterstrike: Heaven Sent, an epic spy thriller/romance novel, has spent the past year, editing and perfecting his late mother, Janet C Smyth’s story, in the face of her tragic loss from Ovarian Cancer in December of 2014, fulfilling the promise he made to his mother on her deathbed, to execute her story.

Included with the novel is the Author’s biography and documentary chronicling the events surrounding his mother, the original Author’s illness and death, and his personal struggles in self-publishing. Author will pledge 10% of all current and future book proceeds to a Cancer and Malpractice charity. For people who love books, or are thinking of writing, the story behind the production of Counterstrike: Heaven Sent should provide a good inspirational and motivational read. 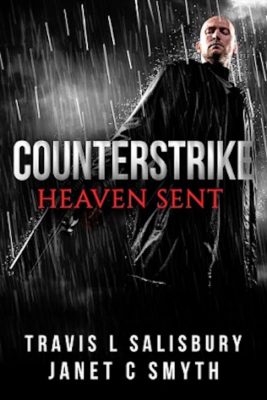 This is it, right here are the two elements that have been nixing my book sales, cover and title, that’s your book’s “business card” right there. (PRNewsfoto/Travis L Salisbury)

“What’s happening is not what I expected to be doing with my life.” – Kate Greenwood, from chapter 11 of Counterstrike: Heaven Sent.

“Move over Bluebloods, 24, Blacklist, and Criminal Minds and make room for Counterstrike! Counterstrike is a well-written and well-researched novel that is very difficult to put into just one genre as it is a mix of genres. I personally found the plot line and the characters to be well developed.” – Sefina Hawke for Readers’ Favorite

“Counterstrike: Heaven Sent by Travis L. Salisbury is an epic novel full of action, romance, thrills and intrigue. It was finished by the original author’s son after his mother, Janet C. Smyth, passed away. Travis completed the novel and published it to honour his mother’s years of writing the story and that is part of what makes it special. I give Travis credit, he finished an amazing novel. It is a tribute to a special lady and a wonderful read for everyone who loves a good fairy tale.” – Lisa Fox, Top Book Reviewers

“Make the most of every day, your meter’s always running” – Author Quote at GoodReads Site

Born Eugene, OR, Feb 7, 1980. Parents Jeffrey Salisbury and Janet Smyth (d. 2014) Divorced 1982. Grew up as a poor kid in Coos Bay, OR. Two years community college. Had previous employment as a caretaker for Grandfather Norman and Mother Janet, for 14 years, thought I’d give a stab at copy editing.

The Editor had the honored and cherished privilege of closely assisting the Author, Mother Janet with copy editing for four years before her passing in 2014. The Editor has now had more than plenty of opportunity to become acquainted with the story of Counterstrike: Heaven Sent.