The Mammoth Letters: Running Away to a Mountain Town by Jennifer K. Crittenden

Skillfully blending anecdote, history, and description, The Mammoth Letters is an amusing and sensitive portrayal of an eclectic town and its colorful inhabitants and will inspire anyone who has wondered about making the leap from one world to another. In a book of wide emotional range, readers will discover mystery, beauty, and tragedy in how a majestic but unforgiving alpine wilderness affects those living at its edge. 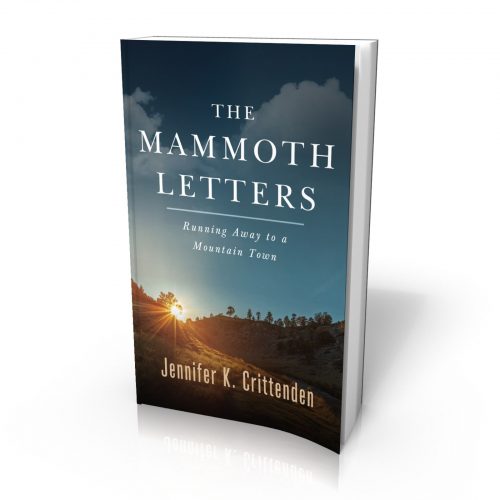 The Mammoth Letters: Running Away to a Mountain Town (PRNewsfoto/Whistling Rabbit Press)

Fresh beginnings in an old place. When businesswoman and writer Jennifer K. Crittenden moved with her family to Mammoth Lakes, the plan was they would stay for a year. Mammoth Lakes is a small town well-known for its ski resort; it’s located at 8,000 feet in the Sierra Nevada, 40 miles from the next town. Her son had fallen in love with snowboarding, and she and her husband were reluctant city dwellers, despite 20 years in Southern California. Her son would attend a new type of school, and Crittenden would work on her third book.

An unintended book. Once at altitude, she did begin writing, but the wrong stuff was coming out. Inspired by her new surroundings, she began sending narrative letters of the family’s experiences to friends. As the beauty and history of the Eastern Sierra drew her in, she learned other stories – of adventure and wildlife, of politics and human nature, of courage and tragedy – that combined with her journal offers an introduction to a place that other reluctant city dwellers may dream about.

“The book is a hybrid,” said Crittenden. “It melds our personal stories with the history, romance and adventure in these dramatic mountains.”

“Had a blast reading this. The author definitely did her homework, and I learned a lot. Whether you’re visiting for the first time or an old time local, you’ll enjoy the Crittenden adventures.”
~ Shields Richardson, Mammoth Lakes town councilman and former mayor.

“Funny, fun, and honest, ‘The Mammoth Letters’ is a fantastic snapshot of life and culture in one of California’s most quirky, charming and remote communities.”
~ Mike Gervais, Mammoth Times publisher

“In the tradition of great storytellers, the author gives us a humorous and informative glimpse into the lives of the intrepid ‘git ‘er done’ people who built this community and the trials and tribulations that brought us from the past to the present.”
~ Robert Joki, president of the Southern Mono Historical Society.

“I am indebted to the Southern Mono Historical Society for their support and contributions to the book,” said Crittenden. A one-dollar donation will be made to the Society with each purchase of a new paperback copy of The Mammoth Letters.

One of the stories included in the book, Absens and Indagans reveals the parallels between the search in the 1930s for a climber from San Francisco, Peter Starr, and the search for Matt Greene, a math teacher who went missing in 2013. That story was originally published in the Mammoth Times in modified form.

The Mammoth Letters goes on sale on September 26, 2017, Johnny Appleseed day. “I’m proud that my book shares a birthday with that kind outdoorsman and naturalist,” said Crittenden.

About the author: Jennifer K. Crittenden is originally from Southern Indiana and lived in San Diego for 20 years before moving to Mammoth Lakes, California with her family. A former CFO, she is the author of The Discreet Guide for Executive Women and You, Not I: Exceptional Presence Through the Eyes of Others. She is the owner of The Discreet Guide®, a professional development training company.