Jonathan and Drew Scott’s memoir, It Takes Two: Our Story

Jonathan and Drew Scott‘s Memoir, It Takes Two: Our Story. In their new book, out on Sept. 5, 2017, the stars of HGTV’s Property Brothers share never-before-heard tales of their childhood and rise to fame.

Since 2011, Jonathan and Drew Scott have brought big laughs and jaw-dropping house renovations to their wildly popular HGTV home-improvement shows. Fans who have been welcoming the Scotts into their homes on TV screens for years may think they know everything about the brothers, but they have so much more to share. Their memoir, It Takes Two: Our Story, reveals new stories about their childhood antics, career ambitions, relationships, and the ups and downs of living in the spotlight. Written by Jonathan and Drew in alternating chapters, the book reads like a conversation with your two friends—who just happen to be entrepreneurs, TV personalities, and best-selling authors. 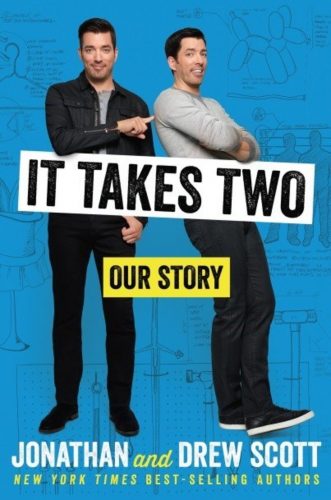 “As a long-time follower of HGTV’s Property Brothers, I can say with confidence that It Takes Two is the book fans have been truly waiting for. It’s jam-packed with stories you’ve never heard before, and all at once it’s funny, inspiring, and even heart-breaking, with both old and new photos on nearly every page, too,” says Justin Schwartz, HMH Executive Editor.

Between the revealing stories, never-before-seen photographs, and hilarious annotations, the pages of It Takes Two: Our Story are engrossing. Fans will come away with a new understanding of the Scott brothers, whose humble beginnings, admirable passion, and rise to success make for an irresistible read.

Jonathan and Drew will be embarking on a nationwide book tour: The Scott Brothers’ House Party, presented by HGTV. The tour offers fans an uncensored look into their lives. There will be plenty of audience participation as they breakdown their do’s and don’ts, share the wisdom they’ve gleaned as entrepreneurs, and reveal all the hilarious moments that don’t make it onto television. Door prizes, impromptu design consults, behind-the-scenes bloopers, and plenty of laughs will round out this fun evening with Jonathan and Drew.

About the Scott Brothers

Entrepreneurs, TV personalities and authors, twin brothers Jonathan and Drew Scott are co-founders of Scott Brothers Global, which includes Scott Brothers Entertainment, The Scott Brothers and Scott Living. With offices in both the U.S. and Canada, Scott Brothers Entertainment produces award-winning and engaging content in all genres for TV, film and digital platforms. Scott Living, a designer collection of indoor and outdoor furniture, décor and bedding is available at a variety of North American retailers including QVC, Costco.com and Lowe’s. As TV personalities, the Scott Brothers’ series are enjoyed by millions of viewers in over 150 countries. Recent musical endeavors include the release of multiple singles and inclusion on the Billboard’s Top Country chart. Their inaugural book, Dream Home was a New York Times and Wall Street Journal best seller.