Great news, KIDZ BOP fans! KIDZ BOP, the #1 music brand for kids, is extending its “Best Time Ever” tour this fall by adding 19 additional concert dates, following the success of initial spring dates. The second leg of the tour, in partnership with Live Nation and sponsored by Juicy Juice Splashers, will bring KIDZ BOP’s live concert experience to thousands more fans across the country. The additional dates will hit several top markets, including Washington DC, Dallas, Seattle, Denver and Phoenix. Tickets for the fall dates officially go on sale to the public on Friday, June 16th. Special VIP tickets, which include a Best Time Ever private party, exclusive merchandise and a meet and greet with the KIDZ BOP Kids, will also be available. For tour dates and ticket information, visit http://kidzbop.com/tour/.

The KIDZ BOP Kids, whose latest album – KIDZ BOP 35 – will debut July 14th, headline the tour. The show also marks the debut of its most ambitious stage design and choreography to date that is sure to amaze and delight fans. Artist Group International (AGI) represents the Best Time Ever tour. 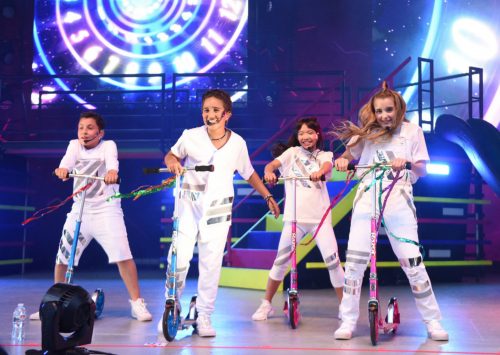 “The Best Time Ever tour is the perfect family event for our venues,” said Jared Braverman, Vice President of Live Nation Touring. “We’re looking forward to expanding our relationship with KIDZ BOP to bring live music to even more kids and parents.”

“We are committed to producing an annual show that’s memorable for both returning fans and first-time concert goers in the audience. The 2017 tour incorporates exciting elements, including the debut of the new KIDZ BOP Kids and an immersive new set design, that really brings the show to the next level,” said Vic Zaraya, President of KIDZ BOP. “We’re thrilled with its success so far and look forward to rolling out to more cities ahead.”

Juicy Juice Splashers is the official sponsor for the KIDZ BOP Best Time Ever tour. Before the concert, fans can enjoy some family time at the Juicy Juice tent and after the performance, guests will receive a free sample of Juicy Juice Splashers*, a better-for-you beverage that features fruity flavors and 50% less sugar vs. the leading juice, an option both parents and kids love.

For a full list of tour dates and ticket information, visit kidzbop.com/tour

About KIDZ BOP
KIDZ BOP connects with kids and families through its best-selling albums, music videos, consumer products and live tours. In the US, KIDZ BOP is the #1 music brand for kids, featuring today’s biggest hits “sung by kids for kids.” KIDZ BOP has sold over 17 million albums and generated over 1 Billion streams, since the family-friendly music brand debuted in 2001. In 2016, KIDZ BOP accounted for 23% of all children’s music sale in the US. The best-selling series has had 24 Top 10 debuts on the Billboard 200 Chart; only three artists in history—The Beatles, The Rolling Stones, and Barbra Streisand—have had more Top 10 albums. For more information, visit kidzbop.com.