One of the most beloved groups in R&B history, XSCAPE, have announced their first-ever headlining tour, THE GREAT XSCAPE TOUR.

Answering the overwhelming demand of fans nationwide, XSCAPE—Kandi Burruss-Tucker, Tameka “Tiny” Harris, and sisters LaTocha and Tamika Scott—return to the stage to perform all of their memorable hits. Adding to the excitement, the group will be joined on tour by special guests, Monica and Tamar Braxton. THE GREAT XSCAPE TOUR kicks off on November 22nd at the Richmond Coliseum in Richmond, VA, hits major markets across North America, and concludes in Los Angeles at the Microsoft Theater on January 6th, 2018. Tickets go on sale this Friday September 22nd in most markets. Check your local listings or go to greatxscapetour.com for more information. 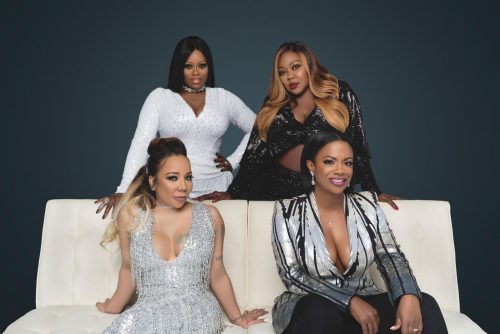 An escape into the world of a legendary, award-winning, multiplatinum R&B powerhouse, THE GREAT XSCAPE TOUR promises to be the ultimate night out. The set will draw from their three consecutive platinum albums—namely, Hummin‘ Comin‘ At ‘Cha, Off the Hook, and Traces of My Lipstick—as it showcases their six top singles, including “Just Kickin‘ It”, “Understanding”, “Who Can I Run To,” and more. The audience begged for this, and XSCAPE are delivering like only they can.

About THE GREAT XSCAPE TOUR, the group comments, “You asked for it! We had so much fun with y’all this summer that we decided to bring the party to cities across the U.S. We decided to do something very special and have our good friends Monica and Tamar Braxton join us! We are beyond excited to have them out with us for the ultimate girls night out show! This is the tour we’ve always wanted to do and we can’t wait to see you there!”

It has been a scorching hot summer for the group; XSCAPE made their triumphant return on the BET Awards performing a trio of their biggest hits. Rolling Stone highlighting it as one of the “Best moments” of the night, calling their performance “magic” and a “show of their unfaltering, still awe-inspiring vocal ranges.” Following this landmark performance, XSCAPE performed two sold-out shows in Detroit, and shut down an entire floor at the Super Dome in New Orleans, as fans stormed the stage not to miss their Essence Festival set. Vibe proclaimed, “They haven’t lost an ounce of their magic.”

Rounding out an epic comeback year, the official XSCAPE docu-series is coming soon to BRAVO.

Catch THE GREAT XSCAPE TOUR in a City near you this fall:

*Tickets on sale Friday, October 6th at 10am local time